Today, about half the activities that people are paid to do in the global economy have the potential to be automated by adapting currently demonstrated technology. In all, 1.2 billion full time equivalents and $14.6 trillion in wages are associated with activities that are technically automatable with current technology. This automation potential differs among countries, with the range spanning from 40% to 55%. Four economies—China, India, Japan, and the United States—dominate the total, accounting for just over half of the wages and almost two-thirds the number of employees associated with activities that are technically automatable by adapting currently demonstrated technologies.

Around the world, automation is transforming work, business, and the economy. China is already the largest market for robots in the world, based on volume. All economies, from Brazil and Germany to India and Saudi Arabia, stand to gain from the hefty productivity boosts that robotics and artificial intelligence will bring. The pace and extent of adoption will vary from country to country, depending on factors including wage levels. But no geography and no sector will remain untouched.

In our research we took a detailed look at 46 countries, representing about 80% of the global workforce. We examined their automation potential today — what’s possible by adapting demonstrated technologies — as well as the potential similarities and differences in how automation could take hold in the future.

In all, 1.2 billion full-time equivalents and $14.6 trillion in wages are associated with activities that are automatable with current technology. This automation potential differs among countries, ranging from 40% to 55%. 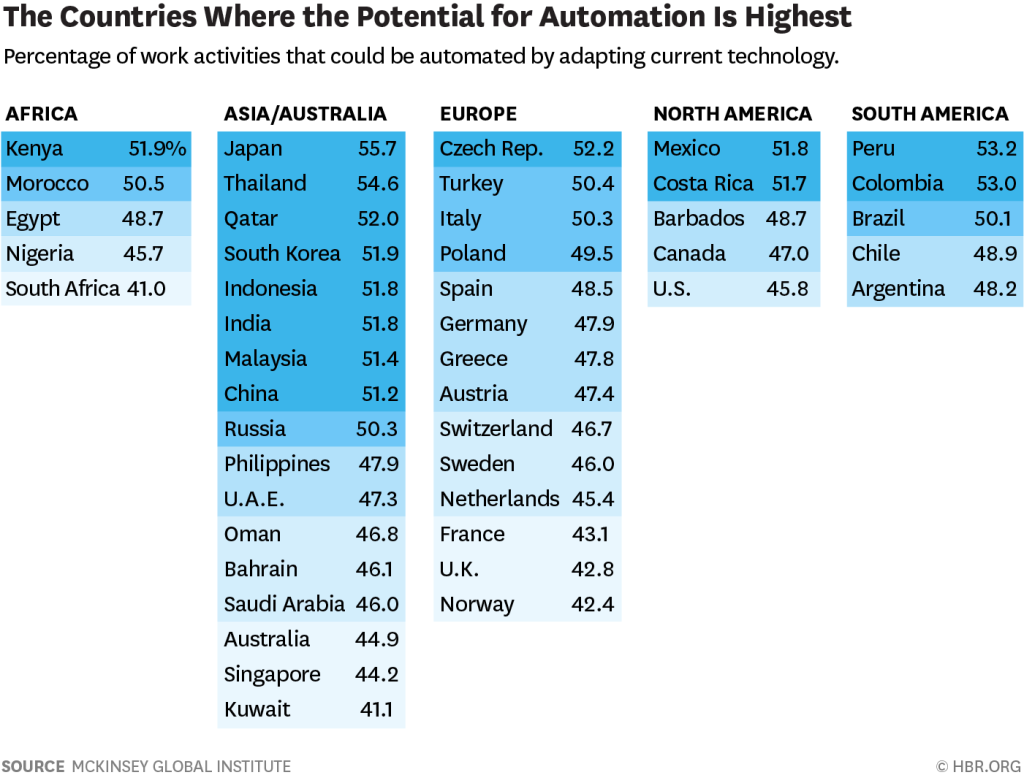 On a global level, four economies — China, India, Japan, and the United States — dominate the total, accounting for just over half of the wages and almost two-thirds the number of employees associated with activities that are technically automatable by adapting demonstrated technologies. Together, China and India may account for the largest potential employment impact — more than 700 million workers between them — because of the relative size of their labor forces. Technical automation potential is also large in Europe: According to our analysis, more than 60 million full-time employee equivalents and more than $1.9 trillion in wages are associated with automatable activities in the five largest economies (France, Germany, Italy, Spain, and the United Kingdom).

We also expect to see large differences among countries in the pace and extent of automation adoption. Numerous factors will determine automation adoption, of which technical feasibility is only one. Many of the other factors are economic and social, and include the cost of hardware or software solutions needed to integrate technologies into the workplace, labor supply and demand dynamics, and regulatory and social acceptance. Some hardware solutions require significant capital expenditures and could be adopted faster in advanced economies than in emerging ones with lower wage levels, where it will be harder to make a business case for adoption because of low wages. But software solutions could be adopted rapidly around the world, particularly those deployed through the cloud, reducing the lag in adoption time. The pace of adoption will also depend on the benefits that countries expect automation to bring for things other than labor substitution, such as the potential to enhance productivity, raise throughput, and improve accuracy and regulatory and social acceptance.

Regardless of the timing, automation could be the shot in the arm that the global economy sorely needs in the decades ahead. Declining birthrates and the trend toward aging in countries from China to Germany mean that peak employment will occur in most countries within 50 years. The expected decline in the share of the working-age population will open an economic growth gap that automation could potentially fill. We estimate that automation could increase global GDP growth by 0.8% to 1.4% annually, assuming that people replaced by automation rejoin the workforce and remain as productive as they were in 2014. Considering the labor substitution effect alone, we calculate that, by 2065, the productivity growth that automation could add to the largest economies in the world (G19 plus Nigeria) is the equivalent of an additional 1.1 billion to 2.2 billion full-time workers.

The productivity growth enabled by automation can ensure continued prosperity in aging nations and could provide an additional boost to fast-growing ones. However, automation on its own will not be sufficient to achieve long-term economic growth aspirations across the world. For that, additional productivity-boosting measures will be needed, including reworking business processes or developing new products, services, and business models.

How could automation play out among countries? We have divided our 46 focus nations into three groups, each of which could use automation to further national economic growth objectives, depending on its demographic trends and growth aspirations. The three groups are:

For all the differences between countries, many of automation’s challenges are universal. For business, the performance benefits are relatively clear, but the issues are more complicated for policy makers. They will need to find ways to embrace the opportunity for their economies to benefit from the productivity growth potential that automation offers, putting in place policies to encourage investment and market incentives to encourage innovation. At the same time, all countries will need to evolve and create policies that help workers and institutions adapt to the impact on employment.

Source: Harvard Business Review-The Countries Most (and Least) Likely to be Affected by Automation

What happens when a bored IT admin meets a hotel Wi-Fi network that does not want to cooperate?

Recent security breaches are so egregious and so truly detrimental to the bottom lines of some really well-known brands that they’re — ironically —  becoming decreasingly effective cautionary tales about security. The spin machine is in full swing, and any time lawyers and PR get involved, takeaways for network administrators are lost.

Far better is to search out personal examples of network security misadventures we encounter during the course of our everyday lives. And this holiday season, while on the road visiting family for Christmas, I found something really juicy. It’s also unfortunately something all too common in our enterprise networks, especially when we’re standing up branch office infrastructure.

Read more at: TechTarget-Hotel Wi-Fi security crumbles in wake of bored IT admin by
Patrick Hubbard

Microsoft is working on a fix for a serious vulnerability in all the latest versions of Internet Explorer (IE) that could be exploited to reveal the login credentials of users.

A proof-of-concept attack (POC) uses a cross-site scripting (XSS) security exploit in which the attacker inserts malicious coding into a link that appears to be from a trustworthy source.

When someone clicks on the link, the embedded programming is submitted as part of the client’s web request and can execute on the victim’s computer, typically allowing the attacker to steal information.

The POC exploit shows that attackers could use malicious web pages to bypass the same origin policy that prevents one site from accessing or modifying browser cookies set by another site.

The flaw was disclosed on the Full Disclosure mailing list by David Leo, a researcher with security consultancy firm Deusen.

The POC exploit page contains a link that when clicked opens the dailymail.co.uk website in a new window, but after seven seconds the site’s content is replaced with “Hacked by Deusen”.

The rogue page is loaded from an external domain, but the browser’s address bar keeps showing http://www.dailymail.co.uk.

The POC attack could also be used to steal HTML-based data the news site stores in cookies on visitors’ computers.

That means attackers could use the exploit to steal authentication cookies many websites use to grant access to user accounts once a visitor has entered a username and password.